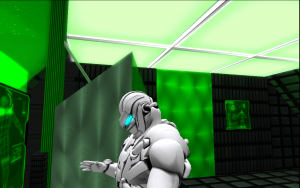 Conditional Notes: While considering themselves highly ethical, they have no concept of physical or emotional pain, and no qualms about inflicting either on their test subjects. Apparently they consider biological life forms to be non-sentient and substantially beneath them. They also have no qualms about abducting humanoid crew members from passing ships. This makes them extremely dangerous.

Society Classification: They are closer to sentient machine than to humanoid. They are a highly developed species with advanced technology, and they consider themselves extremely ethical, and adhere closely to their own laws. But their concept of ethics is so different than ours that they do not “seem” ethical to us.

Other Notes: The Xerr are so completely unlike us that they cannot be fully comprehended. While they are unwilling to communicate with biological life forms, they are willing to communicate with the ship's computer as if it were a sentient being. They are friendly towards the ship, which they consider a sentient machine. Therefore, if communication with them is necessary, it is advised that this be done through the ship's computer in a binary representation of the message. It is also advised that the person doing the communicating pretend that their StarShip (a sentient machine) is speaking.

History and Other Information: There is no data on how the Zurr came into existence but there are vague references that they are a sister species to the Xerr, which SS Cascadia had a brief contact with on Stardate 110425.

They are closer to sentient machine than to humanoid. They are a highly developed species with advanced technology, and they consider themselves extremely ethical, and adhere closely to their own laws.

They do not consider humanoids (or other biological species) as sentient, then see them more like cattle or lab rats, so they have no qualms about about abducting people (or “collecting biological samples) and experimenting on them. This species is close to machine and incapable of feeling physical pain, so they have no concept of pain and no qualms about inflicting pain on their test subjects. Also, because they don't consider us sentient, they would not remove things like combadges or phrases from those abducted, so those abducted could conceivably remain in contact with the ship or with each other when they are not actively being experimented on.

There are many different “sects” (areas of specialty) in this species. But the only one likely to venture off of their world is the scientific research sect. This sect likes to travel to other places to collect “biological samples” and has a set of criteria (impossible for us to understand) as to what constitutes a “compatible biological sample.” One of their projects is to turn biological sample into power sources. Another is to use biological samples as data storage devices. Plus they are always investigating new and creative uses for biological samples.

They do not use language to communicate, but a form of binary code similar to what old earth computers used. However, they can emulate speech when they encounter a species that uses privative and ineffective speech as the primary form of communication.

The species is not hostile by nature, and the scientific sect consider themselves as peaceful researchers. They have advanced weaponry, but seldom use them. However, their scanning device emits a intense green energy field that cuts through Federation shields as if they were not there.

Recommendations: Since this society is “law abiding” to their own laws, the best course of action seems to be to set course for Zurran and try to convince their ruling magistrate to issue an edict forbidding the Science sect to collect biological specimens for their experiments.

Supplemental Information - Stardate 110806. The USS Shogun has successfully convinced the Zurr leader, Zurkum, to stop the abduction and study of humanoids. This makes the Zurr a lot less dangerous to others.