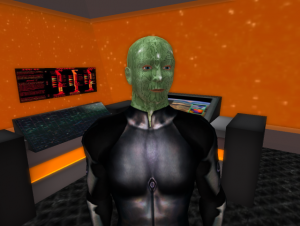 Home Position: Unknown. They were encountered on a starship 189.83 LY Trailing from Pinastri System

Society Classification: Aggressive species, hostile to the Federation, dedicated to eliminating all mammalian species to establish the dominance of the reptilian species.

Government System: theocracy – ruled by their “deity,” the Snake.

Other Notes: This species was “created” from lower level reptilian life forms by the Snake, who used chroniton technology to hyper accelerate their evolution. There is a deep religious connection between the Vipera and their “creator;” they reverence him as a god and would unquestioningly do anything he asks. Their sense of right and wrong is defined by their creator, and he is a known enemy of the Federation.

History and Other Information: The species was encountered on the Snake's ship on 110611. The Vipera crew complement on that ship was relatively small. But a reference to their home world was found in the ship's database, indicating there are tens of thousands of them. There was no information about their planet's location.

Recommendations: Attempt to locate their home world and keep them under covert observation, as they are a dangers species known to be hostile to the Federation.