Sheppard: An early 21st-century Earth astronomer Scott S. Sheppard. He was credited, among other things, with the discovery of many small moons of Jupiter, Saturn, Uranus and Neptune. He has also discovered the second known Neptune Trojan, 2004 UP10 as well as several Kuiper Belt Objects, Centaurs, and Near Earth Asteroids.

These are the voyages of the USS Sheppard, her continuing mission to explore the many worlds of the Delta Quadrant. Tasked with seeking new lifeforms and new civilizations, the Sheppard follows Starfleet’s oldest and most important mission, boldly going where no one has gone before.

Under the capable hands of commanding officer Rich Lombardia and Executive Officer Fema Firefrick, they lead the Sheppard deep into the Delta Quadrant, exploring the unknown. The USS Sheppard is an advanced Odyssey Class starship, equipped to handle a wide variety of mission profiles. The Sheppard is one of the fleet’s oldest serving ships with a long-distinguished history. Due to her incredible 34-year service history, the choice was made to decommission the former Intrepid Class Sheppard. A newer, Odyssey class was named USS Sheppard NCC -74679 – A. Although this new ship is equipped for nearly anything, her success is due largely to her incredible crew and notable command staff. Join us every week and write yourself into UFS history.

The U.S.S Sheppard, began its service as an Intrepid Class Starship in 2383 and served the United Federation Starfleet until February of 2417. During its impressive 34-year service history, the U.S.S Sheppard has had 9 different Commanding Officers. The Sheppard was thought lost on two separate occasion but managed to elude destruction.

After years of adventures, conflicts and multiple refits, the decision was made to decommission the U.S.S. Sheppard. These are new times and UFS faces increasingly more threats. Even as the dust settles from multiple conflicts across all the quadrants, new dangers lurk in the shadows of unexplored space. A brand-new Odyssey Class Starship was constructed at the Pinastri shipyards. To honor the Sheppard, the name and registry number was transferred with one addition. On certain occasions, Starfleet has assigned a letter to end of a registry number when a new class bears the name of an old ship.

Join the U.S.S Sheppard NCC 74679 – A under the command of Captain Rich Lombardia and X.O. Commander Firefrick Resident as they lead the Sheppard’s crew on wild adventure’s through the Delta Quadrant’s unknown.

The U.S.S. Sheppard is an Odyssey Class Starship and was build on Pinastri shipyards launched in 2417. She is currently under the command of Commodore Rich Lombardia. Commodore Lombardia retained command along with his entire senior staff and much of the crew upon it's commissioning.

Commodore Lombardia and his senior staff were integral in providing design modifications that include a modified bridge module that incorporate a fleet operations center and an intelligence operations center. These separate areas provide staff with the areas and resources that allow the Sheppard to act as a fleet Command ship or base of operations for a Starfleet Intelligence unit without interfering with the day to day staarship operation. The secondary shuttle bay was converted to accommodate an Aquarius Class light escort. The primary shuttle bay was enlarged to utilize additional ship to support a wide range of missions.

The initial mission is to conduct show of flag and exploration missions to the surrounding sectors of Pinastri. The goal is to reinforce the Starfleet mission of peace and defense of its members and protectorates while updating known starmaps and exploring places of interest. 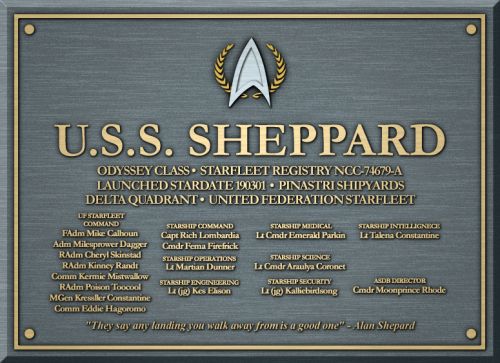 Missions of the USS Sheppard