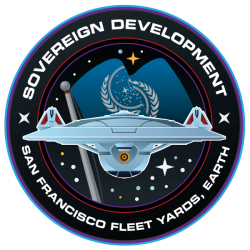 [THIS PAGE IS A WORK IN PROGRESS]

This manual has been designed to show, and elaborate into the USS Erebus' Operational Capabilities.

The Sovereign Project was one of three main forays into the field of new defensive technologies initially intended for use against the Borg. The prototype, U.S.S. Sovereign (NX-75000) was still in the design phase during the Battle of Wolf 359, and began its actual space-trials in 2369.

Initial production of the Sovereign class began at the ASDB Integration Facility, Utopia Planitia, Mars, with final compartmentalization at the San Francisco Fleet Yards, Earth, where it continues to this day. Long term production plans were to include both the Antares Fleet Yards, Antares IV and the New Aberdeen Fleet Yard, Aldebaran, but with the losses during the Dominion War, the need for newer, more varied Starship classes, and the more recent renewed hostilities with the Klingon Empire, all new construction contracts are given to the Utopia Planitia Yards, and the San Francisco Fleet Yards, both located within the Sol System.

Heavily armed, the design philosophy for the Sovereign class was shaped by the discovery of the Borg. The Sovereign Project attempted to push the envelope as far as possible when it came to computer power, shielding, armament and systems capabilities. The Sovereign Class vessel combines the creature comforts associated with the larger Galaxy-class vessels with the tactical power of the Prometheus Class. On the standard configuration, two forward and two aft rapid fire torpedo launch systems are coupled with twelve Type XII phaser emitters, and 1 Ventral Mounted Type IIA Rapid Fire Quantum Torpedo Turret.

A system on QSD equipped vessels to detect inter-dimensional rifts in subspace and temporal distortions in space up to 23 light years away.

During Slipstream operation the Chroniton Integrator is able to get sensor readings several seconds into the future. This prevents QSD equipped vessels from running into objects in space during slipstream travel.

Retrieved from "https://lcars.ufstarfleet.org/index.php?title=USS_Erebus_Engineering_Manual&oldid=81296"
Categories:
This page was last edited on 7 March 2014, at 22:38.