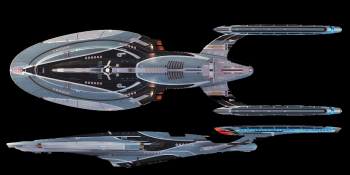 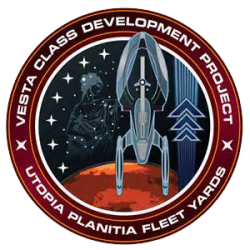 This manual has been designed to show, and elaborate into the USS Elysium's Operational Capabilities.

Following the end of the Dominion War, devastating ship losses required Starfleet to recuperate. Instead of rebuilding the fleet with aging designs, Starfleet R&D instead focused on the introduction of new designs, expanding on the existing technology. But the new design push also spread to development of new technology. The return of the USS Voyager in 2377 brought a treasure trove of new technology, most of it barely tested. The quantum slipstream drive, discovered by the Voyager in 2374 and tested early the next year proved to be unstable. Starfleet engineers studied the slipstream data and attempted to improve on the design. While early trials and simulations seemed promising, the only way to prove the design worked was to incorporate it into a complete test bed vessel.

This led to the development of the Vesta-class starship. The first of her class, the USS Vesta, was herald as the Next Great Experiment, similar to the Excelsior from a century before. Similar in size to the Sovereign class, the Vesta was a ship-of-the-line, capable of performing a multitude of different missions.

The Vesta Class starship was the test-bed for a number of new Starfleet technologies, including quantum slipstream drive which could allow the vessel to travel 65,000 light years in just three months. Systems installed as part of the slipstream drive included a quantum field focus controller at the front of the ship's main deflector and a chroniton integrator. The quantum field focus controller allowed the starship to keep shields and communication online and at 100% during slipstream travel. It could also be used as a beam intensifier. If the ship is heavily damaged and the field focuser is still online, power from the phasers and shields could be rerouted to the main deflection system and be used to ether create a shield bubble or a high intensity phaser beam which could be sustained for as long as power can be routed to the deflector array. The chroniton integrator could be used to take sensor readings several seconds into the future when the ship was using its slipstream drive.

The Vesta Class ships also played a major part in the Borg invasion of 2381, however, because of the class's use of several experimental technologies, much of the classes history is currently classified.

A system on QSD equipped vessels to detect interdimensional rifts in subspace and temporal distortions in space up to 23 light years away.

During Slipstream operation the Chroniton Intergrator is able to get sensor readings several seconds into the future. This prevents QSD equipped vessels from running into objects in space during slipstream travel.

Retrieved from "https://lcars.ufstarfleet.org/index.php?title=USS_Elysium_Engineering_Manual&oldid=79847"
Category:
This page was last edited on 28 August 2013, at 19:12.