She was named after David "Davy" Crockett (August 17, 1786 – March 6, 1836). He was a 19th-century American, folk hero, frontiersman, soldier and politician on planet Earth, Sol-System, Sector 001. He is commonly referred to in popular culture by the epithet "King of the Wild Frontier". He represented Tennessee in the United States House of Representatives at the time, served in the Texas Revolution, and died in the Battle of the Alamo.

The U.S.S. Davy Crockett (NX-88071) is a frigate, the second ship of the Pathfinder-Class, build at Astraios Shipyards, Gamma Quadrant.

Her keel laying took place at stardate 24100701 and as the Class‘ name giving Ship, the NX-88070, USS Pathfinder was destroyed at the 1st launch, the Davy Crockett is now carrying forward the flag of this class.

The Pathfinder Class is a modernized and smaller version of the Miranda-Class with the typical Miranda-class design including the well-known superstructure (or "roll bar") immediately above the primary hull, as a dorsal extension of the ventral nacelle pylons.

The unit can work for 2 years independently from supply stations. Its primary role is to expand the Fleet’s galactic horizons. The equipment and supply enable the ship to do explorations on its own and handle the danger of unknown space. All Labs are up to date to serve the crew as stations for different studies and experiments. Sensors and Deflector Dish are newest standards and enable the ship to search and observe all things it needs to fulfill its goals. Needless to say that such a small vessel also be able to scout in dangerous areas of space or far behind enemy frontiers. The weapon capacity is not made for domination on the battlefields of the Alpha-Quadrant, but it is able to do the final punch, if needed and gives the ship enough destructive capacitive to defend itself when attacked.

The two warp cores give the vessel enough power to full fill its role. Both are able to work independently from each other. So one core delivers the power to move the ship with warp five while the other one gives enough energy for all other subsystems like shields, sensors, deflector and so on. Together they deliver enough power to move the unit over warp 9+. Also they bear the chance to kick the ship forward some LY instantly but this system is not tested, and also bears some risk within.

Finally filled up with the newest technology the ship represents UFS at the edge of the fleets’ horizon on diplomatic missions.

UFS Ships of the Line of this Class::

for reference purposes: The warp core aboard a Galaxy-class starship generated 12.75 billion giga watts of energy per second, which is 12.75 exa watts/s

a) Type : Personnel, 6 person at once

The reactor provides the energy for all the auxiliary ship systems (of non-flight and non-tactical relevance) and can be used to back up power to the warp cores if need would be; yet thus heavily impacting the auxiliary systems (max. additional power 8 % to the available warp capacity in DCM). Only in DCM the reactor can be used to back up the warp cores. 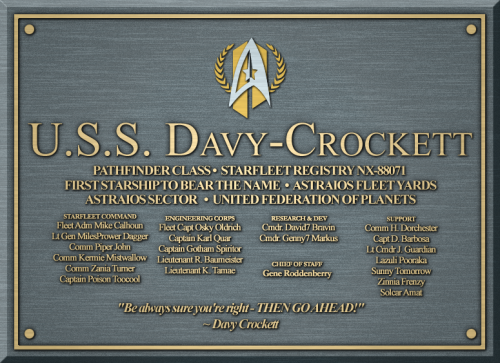 Crew Manifest at the Database