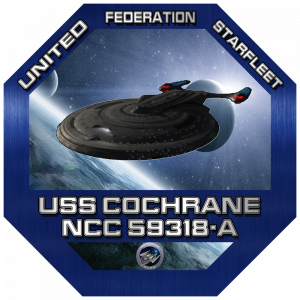 This manual has been designed to show, and elaborate into the USS Cochrane's Operational capabilities.

During the 2360's and early 2370's Starfleet faced numerous threats that could pose a great risk to the Federations safety. Faced with threats such as the Borg and the dominion, it was decided that Starfleet should move away from the "bigger is better" philosophy of preceding decades and focus R & D and construction efforts onto ships with a specific purpose. Several classes of ship benefited from this shift in focus, including the Defiant, Sovereign, Anubis, Normandy, and the experimental Prometheus class starship. Unfortunately, one of the starship designs to be shelved was the Champion Class. Designed as a deep-space exploration vessel, the Champion design was rushed into production with the discovery of the Bajoran Wormhole. It was hoped the Champions would spearhead the exploration of the Gamma Quadrant. The prototype vessel was in the final stages of construction when contact was made with the Dominion. ASDB decided to complete as much as they could on the protoype and suspended production of the Champion class, pending a successful contact with the Dominion. With the outbreak of full-scale war, the Champion project was suspended indefinitely and the prototype put into storage so resources could be dedicated to the war effort.

After the Dominion War, Starfleet began to look at the state of the fleet and identify possible ship classes to cover the shortcomings of the fleet. Although the Galaxy and Nebula classes were successful multi-purpose vessels and explorers in their own right, several of the ships completed during the war had been equipped solely for combat, and had to go into dry-dock for extensive repair/refit. During the war, advances in technology had been primarily focused on offensive and defensive systems for starships, and in C3 (Command, Control, Communications) technology to co-ordinate fleet actions. Neither ship could integrate these advances without sacrificing some of their versatility and excellent science facilities. Some parties proposed a C3 Pod for the Nebula, but the idea was ruled out on the grounds of the additional development time, pod manufacture, and the lead-time on refitting the pod onto the ship would entail. After much consideration, Starfleet decided to build a new class of vessel that could meet the requirements, and the Champion class was selected from the candidates as the base design.

The Champion provided an excellent reference design for the new ideas coming from Starfleet R&D. In an unconventional move, ASDB decided to reduce the length significantly from its original base specification of 1.53km to keep the manufacturing costs down. During the redesign phase, Starfleet engineers likened it to a 20th century Swiss Army Knife. The science facilities were good, but not as good as a Galaxy class, the ship could handle a wide-variety of missions, but it lacked the versatility of a Nebula class, and while the ship was to have impressive combat and diplomatic capabilities, they would not match those of the Sovereign class. The result was a ship that performed well in several key areas but excelled in none, yet was unique enough to stand on its own.

The first Champion deep-space prototype vessel was heavily influenced by the Sovereign class starship, featuring an elongated oval-like saucer section and a secondary hull that was tapered at the front to resemble an arrowhead. Upon production, many criticised the design saying it was not functional enough to serve in the role. When it was announced that the ship was to go into mass production in a different role, Starfleet requested that a new design team was formed. Staff who had worked on the Sovereign, Galaxy, Ambassador and even Excelsior-refit projects were assembled and given the brief to redesign the Champion. The end result was something that took a lot of design cues from other starships, whilst still retaining the style and some of the shaping of the original Champion.

The Champions weapons and defensive systems were based on those of the Sovereign class. Type XII phasers were installed, as was regenerative shielding. The torpedo systems feature no less than three Quantum Burst Turrets, two of which were mounted onto the underside of the saucer, one on the port cutaway section and one on the starboard section. This gives the Champion class a projected forward firepower unparalleled by anything else in service apart from the Akira class. In a rather unconventional move, the 3rd turret was mounted onto the dorsal section of the starship, approximately two-thirds of the way along the central spine. These turrets are backed up by six conventional torpedo launchers, two of which are mounted on the fore, two on the aft of the secondary hull and one each on the fore and aft of the upper saucer sections. Key sections of the ship are covered with a 4.5cm ablative armour matrix.

The sensor systems of the Champion were closely based on those of the Galaxy and Nova class. To fulfil the role of tactical command, Starfleet Engineers decided to link the sensors and subspace comms systems directly to a Combat Information Centre. The CIC is a dedicated control room capable of receiving and compiling the sensor feeds from up to 80 starships. From the CIC, the CO or Strategic Ops staff can direct a fleet action or co-ordinate a major mission effort. For this reason, Champion class vessels are frequently found "hanging back" in fleet engagements, their CO's often the host to Admirals and other fleet staff who co-ordinate the engagement from the CIC. The Champion features an impressive range of science facilities, allowing it to handle a wide variety of scientific missions without the need for additional scientific support. The medical facilities are equally impressive, rivalling those of a small starbase hospital. In addition to these, the Champion also features several large chambers that can easily be refitted by the ships crew to serve a variety of purposes including triage facilities, scientific labs, and additional quarters.

In an unconventional move, it was decided to put a third shuttlebay directly on the ventral side of the secondary hull. Utilising a carry-and-drop system, the third bay has earned the title of the "drop bay" by the marine forces involved in the initial testing. It is anticipated that the drop bay will be mainly used to deploy the transports and runabouts carried by the Champion class. The Champion also features two shuttlebays mounted on the aft of the saucer section. The two bays are linked together to allow multiple launches and returns to occur.

The first Champion class vessel was launched in 2380 and assigned to Obsidian Fleet for evaluation. After a successful trial period under the command of Admiral du Lac, an order for 5 other Champion class vessels were placed by Unted Federation Starfleet's Delta Quadrant Command, the first of which is expected to enter service in 2381. Production on this line has been moved to the Cascadia Shipyards, within the Delta Quadrant.

A system on QSD equipped vessels to detect interdimensional rifts in subspace and temporal distortions in space up to 23 light years away.

During Slipstream operation the Chroniton Intergrator is able to get sensor readings several seconds into the future. This prevents QSD equipped vessels from running into objects in space during slipstream travel.

Retrieved from "https://lcars.ufstarfleet.org/index.php?title=USS_Cochrane_Engineering_Manual&oldid=74512"
Category:
This page was last edited on 30 November 2012, at 18:42.