Named for Doctor Zefram Cochrane, an eccentric genius who was the inventor of warp drive on Earth and became the first recorded Human to travel faster than light, prompting official first contact with the Vulcans in 2063.

In the mid-24th century, the Cochrane served as an exploratory vessel. In the year 2352, the Cochrane discovered the apparently lost Earth colony of New Paris on Turkana IV. An away team led by Security Chief Darryl Adin went down to explore and rescued Tasha Yar from a rape gang. After discovering it was a lost Earth colony, Adin decided to take her back to the ship, after gaining the captain's permission. This was near the end of the Cochrane's mission, and it spent two months returning to Earth. (TNG novel: Survivors)
The Cochrane spent two tours, from 2355 to 2365 attached to Deep Space Station Two near the Galactic Core. During this time they charted and preformed detailed analysis of 10 systems, over 70 planetoids, and over 50 spacial phenomena. They spent 15 months in dock for refit and overhaul then were sent on another planetary survey. In 2366, the Cochrane performed a survey of the planet Eloh, using only unmanned space probes, so as to avoid being visible to Elohsian technology, which was at a 20th century level of advancement. The Cochrane found the Elohsian world to be severely damaged by an ongoing military conflict. (TNG novel: The Romulan Stratagem)
In 2367, the Cochrane served as a transport for retired Admiral Norah Satie during her visit to the USS Enterprise-D in order to investigate a case of possible Romulan espionage. (TNG: "The Drumhead")
In the late 2360s, the Cochrane was assigned to transport personnel to the USS Enterprise on two separate occasions. In late 2367, she transported retired Admiral Norah Satie to the Enterprise to investigate suspected espionage. Early the following year, the Cochrane also transported Wesley Crusher to the Enterprise while he was on shore leave. (TNG episodes: "The Drumhead", "The Game")
In 2369, the Cochrane transported several Starfleet officers, including Julian Bashir and Jadzia Dax, to Deep Space 9. (DS9 episode: "Emissary", ST reference: Star Trek Encyclopedia)

With the relations with the Klingon Empire getting violent Starfleet was forced to press all available ships into service.
The Cochrane, while normally an exploration ship, was pressed into convey and transport duty when the Miranda Class Starships that normally preformed these tasks were called to return to the boarder patrols they were designed to be.
In mid-2372, the Cochrane was ordered to transport dignitaries from various Federation planets to Earth so that they could discuss the rising threat from the Dominion. Shortly after, she transported Nev Reoh and Starsa to Oppalassa and came under attack by Klingon warships. (TNG novel: The Best and the Brightest)
The Cochrane had several close calls but was never heavily damaged or suffered more then a few casualties.
Sadly this luck did not hold out when the next opponent entered the quadrant and the Dominion would reap a bloody toll on the Cochrane.

In 2374, the Cochrane reported numerous crew casualties from fighting in the Dominion War. (DS9 episode: "In the Pale Moonlight")

Constructed at Copernicus Shipyards in 2380 under the Yoyodyne Division, the USS Halcyon was deployed with the second convoy of ships to the Delta Quadrant, where it was used to ferry colonists. The Halcyon served as a border patrol vessel for several years until 2383, when on Stardate 081231, she was assigned to the Excalibur Colony where she served to protect the colony there. In May 2387, the Halcyon was put into dock at SS Excalibur for a general systems overhaul after engaging a Hirogen Fleet, however, due to the strains on mining and resources in the area, repairs and upgrades were put on hold and the crew was reassigned, while the Halcyon sat in drydock. After the Battle of Excalibur, the USS Halcyon was transferred over to the command of the USS Cochrane Crew and was made space worthy again with the functional systems from the irreparably damaged Cochrane. The ship was rechristened USS Cochrane, NCC 59318-A in honor of the Oberth Class Starship that served dutifully in it's 35 year lifespan. The name Cochrane has held a tradition of excellence in it's service within UFS. During her shakedown period after refit, the USS Cochrane, NCC 59318, dealt the final blow to a much larger and tactically able EDC Carrier, helping to turn the tide in the Battle of Excalibur. The USS Cochrane, NCC 59318-A, has re initiated contact with the Nocteen, and initiated First Contact with the Avanis, and is currently researching the migration and current location of the nomadic Avanis species.

The USS Cochrane was lost in the Ravanar System in the Alpha Quadrant, protecting the USS Mateo as it rescued captive Avianis refugees from a rouge faction of Typhon Pact members. She suffered a Warp Core Breech, however all crew were safely evacuated beforehand. 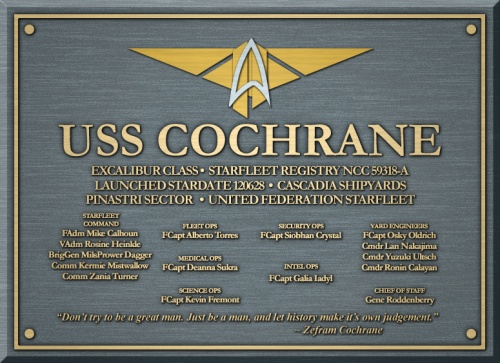 Missions of the USS Cochrane