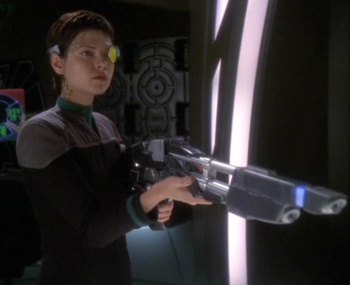 The TR-116 rifle is a hand-held rifle-type weapon, a projectile weapon developed by Starfleet Security for use in dampening fields or radiogenic environments where conventional energy weapons would be useless. The rifle fires a chemically propelled tritanium bullet. A working prototype of the weapon was developed, but Starfleet opted not to produce the weapon after the advent of the regenerative phaser. The TR-116 could be operated by both right and left-handed shooters.