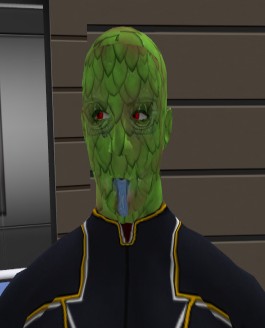 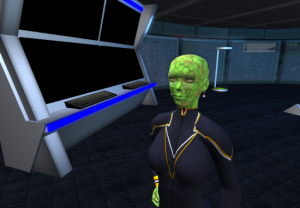 History and Other Information: The Scincidae were encountered at a Starbase 159.11 LY Rimward from Pinastri. A magnetic mining system had attached explosives to the hull that had already killed two other members of their scientific team. The two remaining scientists had been requesting aid, and the USS Shogun came to answer their distress call, thus initiating first contact.

The Scincidae had obtained warp technology approximately 250 years ago and are ahead of Federation science in many biological fields, but not as advanced in directed energy or matter/anitmatter technologies. They are a friendly, but somewhat paranoid species due to regular attacks on them by the Sla'theri.

The Scincidae are governed by a Representative Democratic system, similar to the Federation. They enjoy scientific discovery and work in general that leads to exploration and discovery.

Recommendations: The Scincidae are a very intelligent species who are generally kind and easy to work with. They do not seem dissimilar in desires and ethic to Starfleet. Work should be done in the diplomatic area with them that may eventually lead to their admittance to the Federation.

Further Information: Scincidae skins can be obtained on XLStreet or by contacting Shadow Makira inworld in SL.