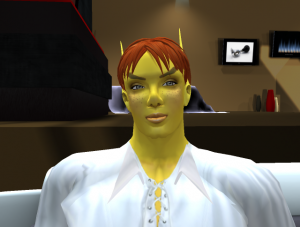 History and Other Information: The Scalentans are a peaceful people who have achieved roughly the equivalent technology of mid-21st Century Earth. They have not achieved warp travel as of yet, but this does not seem out of their reach in the future. Information taken from the communications satellites would lead us to believe that crime still exists but has diminished greatly within the last 50 years. Due to changes in food distribution networks, starvation is unknown. They are currently transitioning towards a money-less society, however some factions within the Parliament greatly oppose this. The last election was held two of their years ago and nothing in the vid-casts intercepted would indicate that a change in this policy is underway with another election due in three more years. Scalentan is the official governmental language, however several continental languages are spoken.

Recommendations: Prime Directive to be observed, but in time may make a fine addition to UFS

Retrieved from "https://lcars.ufstarfleet.org/index.php?title=Scalentans&oldid=45804"
Categories:
This page was last edited on 4 September 2010, at 17:34.