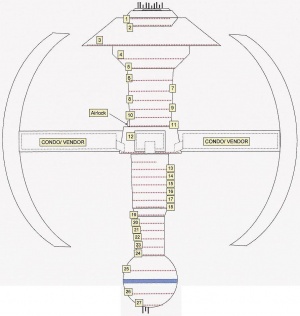 The space station sits in the same orbital plane as Pinastri Prime. It is an Ournal variant class station, and was originally named Cascade. Manufacturing started on Earth in early 2381. It was transported in segments to Pinastri and assembly began later that year on stardate 060812.

In mid 2382 the station underwent a major redesign and extensive Engineering works began. Approximately 6 months later during 2383 the redesign work was completed and the station was renamed SS Tranquility.

Retrieved from "https://lcars.ufstarfleet.org/index.php?title=SS_Tranquility_Crew_Archive&oldid=70697"
Category:
This page was last edited on 5 July 2012, at 14:59.