The SS Peedy Thor is a Watchtower class station, located in the heart of the Pinastri System just beyond the Humboldt Belt sitting in geosynchronous orbit with Pinastri IV, also known as Pinastri Prime. Construction of the station began a few months after the Volcanic Eruption on Pinastri Prime. The Pinastri Ground Facility was forever gone and in our minds we were uncertain of the future. We lost many good crew members and still feel that loss every day.

During this time we resided on the SS Athena. The Athena was a small Marine station with very cramped quarters for our large crew. Many of the crew were reassigned to other ships of line, while a small number of us stayed on the SS Athena. Even with the lessoned numbers we were still quite cramped and medical conditions were not the best with so many crew still there. The engineers, with help from civilian contractors, began to construct what would someday be the SS Peedy Thor. The Peedy Thor was assembled on-site during a long two year process. We weathered several ion storms, a chaotic system full of dangers, and the occasional malfunction of equipment.

Though the struggle to complete this station has been long, and filled with tragedy, it has also been rewarding. To see the planet burn and the SS Peedy Thor rise like a newborn baby, born in the heat of battle, to carry on with its first screams being “UFS Strong”.

During Task Force Phoenix in the year 2417 the crew of SS Peedy Thor relocated from orbit into a building at Headquarters on the Pinastri Surface. The SS Peedy Thor Station is now not only comprised of an orbital station for ship repairs, docking and restocking but also a building on the Surface. SS Peedy Thor is now run from a main operations base within Headquarters. This has not only proven to be a greater secure area but also a hub for all Starfleet Officers. 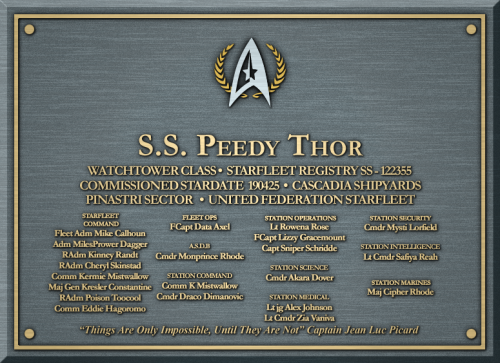