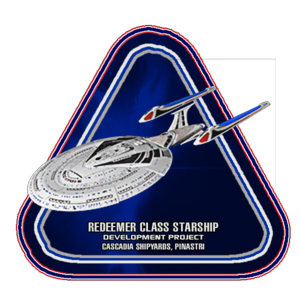 Near the latter part of the Terran Empire Campaigns, Starfleet felt that a new type of ship was necessary to counter-act the devils of the Empire's increasingly powerful ships and raids. However, before formal groundwork could be laid down for the project, the war abruptly ended in the final battle in the heart of the Empire's foothold in our galaxy. The USS Redeemer was destroyed during that battle.

Lt. Ronin Calayan, a highly esteemed engineer who had served Starfleet and UFS profoundly had decided to resurrect the Redeemer class project and selected Lt. Chase Quinnell to help him in completing the project. Although protests from some in the UFS Core of Engineers hindered progress, ultimately, the completion of the plans and construction of the USS Redeemer-A were completed with success. However, since there was not as much need for such a high-powered vessel after the war, many of the improvements from the original plans were not included in the finished product.

Following completion of the ship, Lt. Calayan returned to the Alpha Quadrant to continue his career in a more able environment. He has said he hopes to return to UFS one day, if ever possible.

Ships of the Class

The first ship of its class, the USS Redeemer-A has often exceeded its own limits and has proved time and again of its prowess on the field. It received a refit at Starbase 427 for an added science lab, some new recreational facilities, as well as a few decks being over-hauled. The captain and 1st officer chairs received what can only be described as a highly coveted piece of equipment-- seatbelts.

The second ship of its class, it has served UFS well in the one year it has been in service. It encountered the Mendari for the first time and was disabled. Following that, it was given a refit and a new crew.

Retrieved from "https://lcars.ufstarfleet.org/index.php?title=Redeemer_Class&oldid=75615"
Category:
This page was last edited on 7 January 2013, at 23:47.