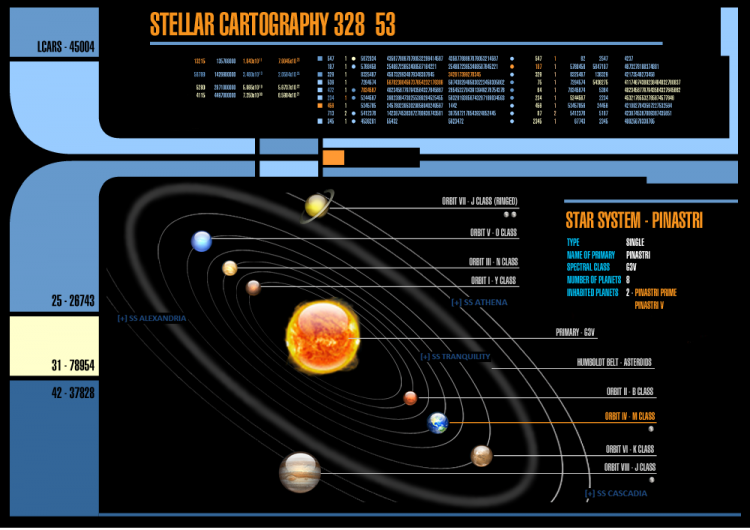 The Pinastri Star System (also affectionately referred to as Sector001) is a star system in the Delta Quadrant containing eight planets. It is a key system for the United Federation of Planets as it is where they despatched their subordinate organisation, UFS to in order to set up a permament base in the Delta Quadrant.

The Pinastri system is located in the Pinastri Sector on the rimward edge of the Nekrit Expanse close to where it borders with the Syllerran Rift. It was identified and chosen by Starfleet Command after careful analysis of the database and sensor logs of the USS Voyager on its return from the Delta Quadrant.

Voyager travelled to the Borg Unicomplex on many occasions, therefore it’s sensor logs were full of information about this region of space allowing Starfleet Command to choose the right system to colonise.

It is a strategic location within close proximity of a number of alien cultures such as the Voth and the ruins of the Primary Borg Unicomplex, but also due it being fairly central in the quadrant, it is within warp distance of most of the key political powers. The system is some 63,000 light years from Earth.

Retrieved from "https://lcars.ufstarfleet.org/index.php?title=Pinastri_Star_System&oldid=60783"
Categories:
This page was last edited on 26 June 2011, at 13:05.