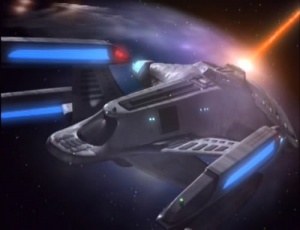 The Multi-Layer Shield System (M.L.S.S.) was developed for, and added to the USS Prometheus and the Prometheus Class in the late 2370s, and has since been modified for use aboard other vessels, such as, but not limited to, the Sovereign, Vesta, and Champion Classes. The M.L.S.S. itself consists of 3 layers which absorb the impact from phaser and torpedo fire. It works in conjunction with the Ablative Hull Armor and acts as the first line of defense for the ship when the shields are either compromised or have failed due to excessive damage.

Layer 3 - The outermost layer manipulates Graviton polarity in a way not typical to shields, creating a Graviton flux disruption that prevents many know designs of threat tractor beams from locking on to the vessel. This layer also incorporates transport inhibitor technology, helping to prevent unwanted transporter activity in battle.

Layer 2 - The middle layer incorporates automatic rotation of frequency and modulation with metaphasics, which absorbs enemy fire, spreads it out along the shield. This shield sends data on what type of weapon is used and what frequency and phase the weapon uses. Once this is analyzed, the computer can automatically configure shield to have the same frequency as the incoming weapon, but to different modulation, which dramatically increases shield efficiency.

Layer 1 - The innermost shield layer is a multiphasic shield. Based on standard regenerative shielding, this is the ship's last shielded line of defense, once this is gone the ships only defense is the Ablative Hull Armor. The key to this layer is its ability to 'wave' while in a state of temporal flux. This technology was developed in part by the crew of USS Voyager and the Mannheim Research Station. Instead of a standard shield bubble, this layer 'ripples' while in a state of temporal flux. This dramatically increases protection against weapons such as the Quantum, and Transphasic torpedoes while at the same time helping protect the ship from temporal anomalies.

The design of the M.L.S.S. was modified just prior to its entering service, in 2376, in order to increase effectiveness against both high-energy tractor beams and phased Polaron particles, measures clearly aimed at the Borg and Dominion respectively. Under normal operation the shield modulation frequencies are under the control of the ships computer system, which continually evaluates incoming weapons fire and automatically re-modulates the shields to give the most effective possible defense. It is thought that this system, in conjunction with transport inhibitor technology, will also enable the shield system to prevent beam-through by Borg and Dominion transporter technology.