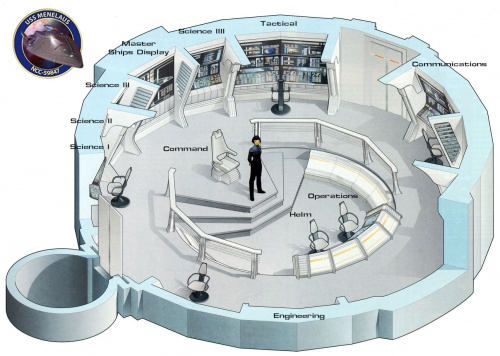 This is a brief to describe Bridge operations aboard Menelaus

Mandatory manned stations are (in order):

If any of these stations are empty, you must assume the station even at the expense of another (non essential) station you’re manning.

The only exception to this is the command station where someone will be appointed to take command. In events where the CO, XO & SO are incapacitated before command can be passed, then the person with Seniority takes command (Chief and Vice of Department).

Seniority aboard is as follows:

The Bridge of a UFS starship is the command centre, and so it is important that each department can work from this nerve centre, and that the officers who work there can also multi-task other stations.

Can be configured to have one or two seats for the XO. This is the station from which the commanding officer supervises the running of the ship. The CO is the focal point of all bridge activity and is the one who issues orders. Working in tandem with the XO the command officers are able to direct all departments on ship to achieve mission goals. This station is centrally located.

Located to the bow of the bridge in a depressed region of the bridge, the Helm station is manned at all times. From here the ship movement can be controlled both under computer control and manual manoeuvres. The officer at this station is also responsible for monitoring Inertial dampening systems & subspace field geometry. Officer manning this station need to be familiar with advanced Multi Vector Assault Mode tactical manoeuvres.

The Helm station can also display readouts on ships sensors, access communications and monitor ship wide status should the need arise in an emergency.

Connected directly to the helm console the officer manning this station can oversee the ships resources, as well as the operational activities (such as shuttle departure). It is also this station that controls the Multi Sector Assault Mode. Other responsibilities include overseeing the ships change in alert status, overseeing the evacuation of the ship, monitoring ships power levels during Reduced Power Operations, or any other resource based task. In times of emergency, the Operations officer can take control of the Tactical systems, engineering readouts as well as Helm operations.

This station is usually manned by the Chief of Operations.

The Tactical station is located to the port quarter of the Bridge. From this station a Tactical/Security officer is able to coordinate ships security relating to missions parameters. The Officer manning this station is also responsible for the ships offensive and defensive capabilities as well as the ships many tactical sensor readouts that allow them real time data on enemy ship capabilities. Tactical station can also gather data from the Operations, Science, Helm, Comms and Engineering systems. This station is normally manned by the Chief of Security; however another experienced tactical officer can also fill this roll. Knowledge and training of Advanced Multi Vector Assault More Operations is a requirement to man this station.

An unusual step was taken in the Prometheus design to incorporate a dedicated Communications station located to the port bow. The ships heavy tilt towards combat operations as well as its advanced tactical capabilities meant that communication can become overwhelming to combine with standard duties, such as Tactical or Operations duties (which some ships double up with). This station can however have its functions transferred to other stations:

Stations that can take the role of Communications are (in order):

Stations that can take the roll of engineering are (limited capacity):

This is the primary Science station located on the Starboard Quarter. It is generally manned by the Chief of Science. This station also doubles as environmental station for the deck and ship.

This console is directly attached to the Science I station. It is also part of the primary console. This station is often doubled up for medical officers who come to the bridge.

Science Stations I & II have a direct link to the Ops, Helm and Tactical readouts. This allows the officer manning this station access to all data that will help them understand the unknown and finding solutions to problems as they arise.

Located aft on the bridge. Split by the MSD these two stations sit at Science as their primary configuration however they can be configured to any station as required. Generally these stations are not manned unless daily duties require it or mission specialists come aboard.

Used to provide a detailed overview of the ships status. A second MSD can be found in Engineering. This station has no seat, and is rarely manned. This station is used for the Commanding officer to login to the computer system as well as activate/deactivate the self destruct.

All stations on the bridge can be rerouted to engineering where control of the ship can be maintained.

Retrieved from "https://lcars.ufstarfleet.org/index.php?title=Menelaus_Bridge_Best_Practises&oldid=69633"
Category:
This page was last edited on 28 June 2012, at 13:55.