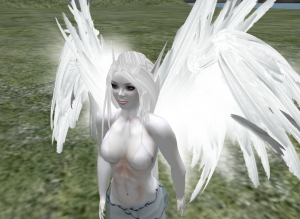 Society Classification: The Kvaran have complex family relationships and work well as equals with each other. They are peaceful and honorable.

Government System: Theocracy, their leader is known as the “head disciple.”

Other Notes: The Kvaran are concerned for the souls of all who they meet but do not wish to push their beliefs on others, and are tolerant of all religions. Their deity is K'larn, and they believe it is K'arn's will for all to die so that they might be transformed to a higher plain of existence where they will have nearly unlimited ability and complete happiness. They also believe that those who do not accept their fate (premature death) will forever be doomed to a horrible existence where they will walk the cosmos as incorporeal spirits, able to see and suffer, but unable to act or react.

Their believe system has left them in state where they welcome death and will not protect themselves from any physical threats. As a result, they do not possess any planetary defense systems or personal weapons.

The Kvaran are peaceful and honorable. In many ways they would make excellent additions to the Federation, if not for their apathy. The believe it is pointless to progress past their certain point as the end is most assuredly coming.

History and Other Information: The Kvaran have used warp travel to push beyond their world, several hundred years ago in an attempt to be missionaries for other worlds. Their attempt to spread "The Word" ultimately failed. As a result they withdrew to their home planet and decided to 'perfect' their own lives based on The Word, what became their religion.

Their prophecies predicted the “transition” to the higher plain (e.g., annihilation) on the same day that the Shogun made contact with them. The Shogun detected a fleet of approaching rogue Hirogen ships—the same ones who destroyed another planet on Stardate 110723. The Kvaran's understood they were about to be annihilated. They refused help, saying that the Hirogen's were instruments in K'larns hands to fulfill the prophecy and bring them into a higher plane of existence. The species willingly accepted their extermination, and they are now extinct.

Recommendations: The data and specimens collected from their planet should be preserved as a memorial to their culture.