The Hirogen are nomadic spacefarers who have no known home planet, as for what seems to be eons, they have called their spaceships their only home. Most often, they travel alone, but they are occasionally encountered in small groups of hunting packs, and a lone ship that runs into trouble can summon others to its aid.

Hirogen adult males are quite large, standing above the average height of other known humanoid species. Their sensory perception is acute and quite useful for a hunting species. The Hirogen also possess an impressive immune system for attacking foreign bodies.

The Hirogen wear heavy forbidding black body armour that can defeat most hostile environments; one Hirogen boasted that he once tracked a silicon-based lifeform through the neutronium mantle of a collapsed star. The Hirogen often wear mouth guards over the lower half of their faces, but whether that is for breathing or for adaptation is not known; they seem to be perfectly capable of breathing a Class-M atmosphere without the guards. In addition they sometimes wear a narrow visor over their eyes, obscuring their faces completely. 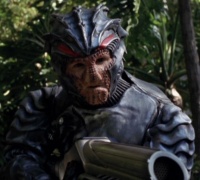 Little information is available on Hirogen family structure. What is known is that the Hirogen are driven by the urge to hunt. The pursuit of prey has become their way of life; their entire existence is based on the hunt, including their social rituals, art, and religious beliefs. Little is known about Hirogen women, no females or children have ever been seen, and how they reproduce is unknown. Though it has been suggested that they pursue male hunters in possession of rare or unique trophies of the hunt

Their pursuit of prey has carried them across huge distances. The Hirogen might be considered the wolves of the Delta Quadrant, and their prey is any species unlucky enough to cross their path.

Each group is led by an alpha male. The others in the ‘pack’ are subordinate to the Alpha-Hirogen, whose position is won and maintained by force. A new Alpha-Hirogen will step up to take command whenever the old one shows weakness.

This survival of the fittest within the Hirogen social structure does not mean that there is constant internal battling for superiority however. There seems to be harmony within the group until failures by the current leader threaten the hunt and force a confrontation, such as when attempts at altering the ways of the hunt made by the Alpha-Hirogen of the group that took over USS Voyager, were perceived as a threat to the group. This leader was killed by his immediate subordinate.

The Hirogen seem to have no compassion for sentient lifeforms of any kind. If a species is weak, they will ignore it. If it offers a challenge, they will hunt it relentlessly, anticipating the final moment, a face-to-face encounter in which the prey will be trapped and exterminated. There is no mercy and no compassion; they think nothing of killing a prey that is badly injured, or too weak to fight back.

The Hirogen ships are as dark inside as the hearts of the species, and span wide areas of the Delta Quadrant in the course of their hunts. A map of one Hirogen vessel’s flight path over five years can reveal a trajectory of amazing proportions, covering scores of light years and as many as 90 star systems in a single year.

The ship roam in a seemingly random pattern, taking a zigzag course that seems without purpose but that is usually a result of chasing their prey. Although the Hirogen prefer to hunt alone, they will, on occasion, join forces with other ships in a multi-pronged attack when the challenge is great, and the resilience of their prey is strong. 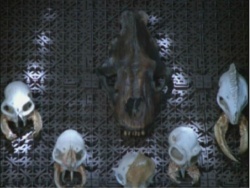 Most of their hunts take place in space, but they will track their prey to a particular planet, asteroid, or small moon, where it seeks refuge. The Hirogen are not known to land on heavily populated worlds; if they do, they do so with stealth. The Hirogen claim to hunt only those species that provide a challenge, claiming “Strong prey makes for a better hunt”. In this, they might be termed to show sportsmanship. But when the prey is finally subdued, the Hirogen are anything but sporting when finishing off their capture.

Relics of the hunt are treasured highly by the Hirogen and ships are filled with prize artefacts of their victories, often torn from the bodies of their prey while they are still alive. Commander Tuvok, while held captive on a Hirogen ship with Seven of Nine, observed the bundled and mounted mortal body parts of countless species; the skeletons from dozens of alien races were displayed like trophies.

There is also evidence that they may use some of their victims for food; they break down the bodies into a protein rich liquid kept in large containers inside their ships. Even more frightening are the collections of weapons and strange looking instruments on the walls that look primed and ready to help prisoners join those piles of death.

Everything about the Hirogen indicates that the best course of action is to avoid them, if they will let us. For most species the chances of escape are slim.

The Hirogen’s pattern of behaviour has gone on for centuries, and whatever cultural imperative originally incited it is long since forgotten. The Hirogen now face a slow attrition, as over specialisation has narrowed their evolutionary paths.

Their reproductive options are limited and their education and training focuses only on one small field. Increasing isolation from the bulk of their population, in small hunting ships with a limited gene pool, means that unless their society is radically reconfigured, they are not a viable candidate for long-term species survival.

The Hirogen have appropriated a network of ancient communication devices. Capable of sending and receiving subspace signals over thousands of light years, the network encompasses entire quadrants of space.

An enormous network of relay stations spans the distance between Delta and Alpha Quadrants, and is able to convey a diverse range of communications and sensor information over this vast area. It is unknown which race or races built the network, which is at least 100,000 years old, but it is now claimed by the Hirogen.

The Hirogen use the communications relays to stay in touch with fellow ships that roam across huge expanses in search of new and unusual prey. 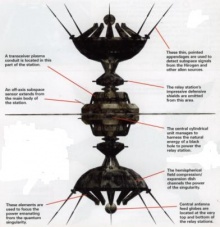 The network first came to the attention of Starfleet when Seven of Nine, serving aboard the USS Voyager located one of its relay stations using the advanced technology of her ship’s Astrometrics lab. Believing it to be abandoned she accessed the nearest station and was able to extend the sensors like dominoes right through to the furthest station, located near the outer edges of the Alpha Quadrants border with the Beta Quadrant.

The Voyager crew were able to use the Hirogen network by returning their communications signals to match the network’s interlink frequency. The Hirogen do not take kindly to other species found using their ‘modules’. They are able to register unauthorised usage and trace the signal back to its source, as well as jam further transmissions.

Voyager was able to contact the federation via the sensor network, but the reply they received degraded en route. The bulk of the message became lodged at one station, and the longer it remained, the further it degraded. Seven of Nine was able to retrieve some of the message sent by Starfleet, but it was an extremely slow process, taking her 58 hours to download just six words.

The relay station outputs an incredible amount of energy through using a quantum singularity as a power source. This tiny black hole is only a centimetre in diameter, but it gives out four terawatts of energy – equivalent to as much energy generated each minute by a typical star. This causes it to project a gravimetric field that can be registered more than two light years away. The purpose of this field is to prevent alien ships from approaching the relay station.

During 2374, a Hirogen hunting pack overwhelmed the USS Voyager, and attempted to subjugate the crew as cannon fodder in a series of holodeck scenarios. This actually provided the race with a new alternative to their traditional hunting grounds. The subsequent manner in which the Starfleet crew fought back, however, swiftly deprived the Hirogen of their new hunting ground.

Nevertheless, the Hirogen Alpha’s vision of the future was made apparent to Captain Janeway. He revealed that he was virtually alone among his people – he could see that their insistence on hunting being the only aim in life, his race were spreading themselves too thin, and heading for extinction.

His experiments with holodeck technology had a greater underlying purpose than the thrill of the hunt; the Hirogen Alpha had envisioned a future where, by establishing holodecks of their own, his race could still fulfil themselves with hunting, but could also create outposts where their people could meet and interact – stable bases rather than the nomadic existence caused by their dispersal.

He hoped that in time, entire new classes of Hirogen might develop, devoted to something other than hunting, yet still able to satisfy their cultural imperative without needing to slaughter other beings.

Janeway made an uncharacteristic error in giving the Hirogen holodeck technology. She hoped that in learning to stalk holographic prey, the Hirogen would be able to satisfy their bloodlust and at the same time move toward a less aggressive, broader-based society, without needing to take the lives of sentient life forms.

This noble goal was partially achieved; the Hirogen do stop hunting organic beings, and there was, within a handful of year, a notable stratification of their society, with the development of the technician-class, as well as the hunter-class.

By 2377, they had created immense holographic training facilities on which Hirogen from different packs could meet, interact and hunt holograms. The Hirogen’s hunting instincts were not satisfied with simple pursuit programs, however; they wanted their prey to be as realistic as possible.

Disabling the Starfleet safety protocols guaranteed a greater challenge, and heightened sensory subroutines, enhanced learning algorithms, and countless other modifications raised the intelligence of the holo-characters and their ability to adapt and counterattack. This learning process eventually crystallised into sentience, and one such sentient program, with the appearance of a Bajoran male named Iden, developed a taste for vengeance.

He was the favourite prey of his Alpha, but after repeated violent "deaths" at his Alpha's hands, Iden was able to kill him. He stole a ship and liberated the other holograms on their space station. Using this ship, Iden attacked and liberated more stations, resulting in heavy Hirogen casualties.

The Hirogen had to return to their training facilities, the deaths of their fellows un-avenged. Holodeck technology is now too much part of their society for any attempt at removal by the Federation to be successful. Pandora’s Box has been opened, and whatever the long-term effects, for good or ill, the Hirogen holodeck programs will continue to run their violent battles.