A Starflet ship on an exploration mission discovered the presence of an M class planet inhabited within the Beta quadrant. The most strange thing about the area was a station in orbit, an alien one. UFS command's order to explore the planet and the station.

After several weeks of explorations, the scientists found the presence of life forms on the planet that was called "Genesis". The station was empty with no trace os alien presence or any information in the computer database of the station.

The Command orders were to establish a permanent presence in the planet and send a crew to that station that was called SS Pegasus. The fleet engineers in charge of Fleet Captain Osky Oldrich built on surface a colony with several facilities such us, Welcome center, HQ building, Supply & Condos building, Academy Building and Medical Building. With time 3 new ships were built in Genesis shipyard, the USS Armstrong, the USS Taylorholic Durant which is the flag ship of UFS and an Intrepid class ship. After 3 years the USS Curiosity was sent to this sector to help the colonist to explore and help with the science duties related with all life forms in Genesis planet. 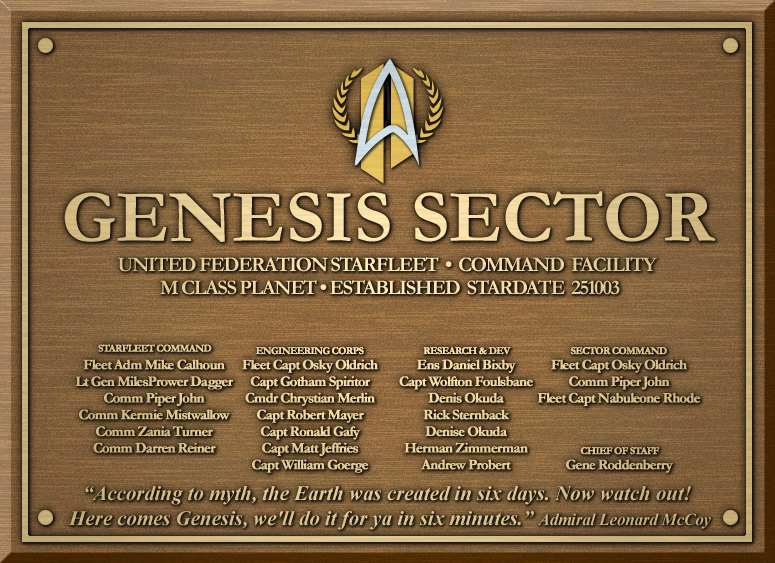 Species created by the crew

Retrieved from "https://lcars.ufstarfleet.org/index.php?title=Genesis_Sector&oldid=80611"
Categories:
This page was last edited on 19 January 2014, at 10:36.