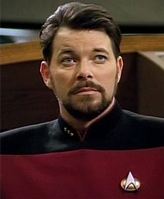 The role of the first officer is vital to the smooth running of any starship or starbase. The bonds of friendship and loyalty forged between a captain and their number one can last long after their service together ends.

Second only to the captain, the first officer is an invaluable part of the function and command structure of any starship or starbase. The position, which is also sometimes referred to as executive officer or ‘number one’, was first established on Earth in the seagoing vessels of the mid 15th century; many planets have developed similar positions in their respective military environments. The position has evolved into a multifaceted job with many important responsibilities.

The primary responsibility of the first officer is to take command when the captain is killed, incapacitated, missing, or for some other reason, no longer able to remain in command. As such the first officer must be as knowledgeable about, and intimately familiar with their ship or starbase as its captain. At any time, the first officer may be called upon to take the centre seat and must be able to do so without hesitation.

Taking command is the primary duty, but the day-to-day responsibilities lie in keeping the ship or starbase operating at peak proficiency. The first officer oversees all department heads on board and is constantly briefed by them as to the status of their various departments and concerns. He or she is responsible for informing the captain of the results of the briefings and for recommending a course of action. He or she is also responsible for reviewing crew performance and for recommending crew members for promotion; the captain then presents a final review for submission to Starfleet Command.

Another of the first officer’s jobs is to keep the crew happy. On many ships and stations, he or she does this by working closely with the ship’s counsellor. Together, they work to maintain the peak proficiency of the crew by seeing that there are no problems and that all members of the crew feel that they can come to either of them with any situation.

Essentially the first officer acts as a buffer between the crew and the captain. While at first this may seem to be a very impersonal way to run things, this buffer is important. If the captain is distracted by all of the day-to-day minutiae, he or she would be unable to completely focus on the more important responsibilities of command. Therefore it is the first officer’s responsibility to handle the small details, and report only the most important of these matters to the captain when it is felt that the captain’s intervention is necessary.

Most first officers reach the position from the command track of Starfleet, but there are some that have come from the science branch, and even more infrequently, but not unheard of, from Engineering. However, no matter what duty branch the first officer comes from, all of their responsibilities, while numerous, have an underlying purpose: to prepare them for his or her own command.

The first officer’s position is the place where captains are bred and groomed. There are very few ‘career’ first officers, and while any first officer has the option to turn down promotion to the captaincy, very few do. In fact, if a first officer turns down a promotion more than once, it can be looked at unfavourably.

The first officer’s position is one of great responsibility, and great reward. A good first officer can make the difference between a successful mission and a disastrous one. It is the first officer who has their finger on the pulse, and can know instantly when something is amiss. The first officer knows the captain inside out, and should be able to predict any decision that the captain might make and carry out any order to the letter. And, like any Starfleet officer, the first officer is expected to give his life if called for in the line of duty. It is an invaluable position and a crucial link in the chain of command.