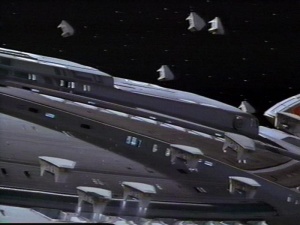 A small capsule found aboard most starships that are used in the event that the parent ship is damaged and pending destruction. Starfleet vessels have enough escape pods to evacuate the entire crew and any non-Starfleet personnel during normal operations.

Most Escape pods are fitted with a large amount of rations and limited medical capabilities. Once launched, Escape pods can be recovered by the parent starship or other starships to rescue the occupants. Escape pods can also be tethered together to extend/maximise the limited resources available till rescue arrives. Some escape pods are also fitted to allow for entry into the atmosphere of a planet.