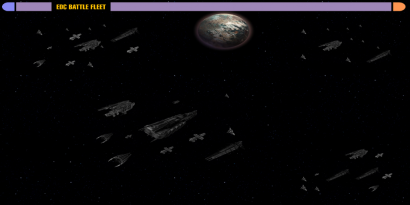 It has come to my immediate attention that a sizable grouping of hostile ships belonging to the hostile Private Military Corporation, the EDC, has been sighted in Sector 004C, also known as Excalibur Sector.

It is the considered opinion of the investigating officers, and myself, that this Fleet has hostile intentions towards the area, particularly towards the Excalibur Colony itself. Even if it is not, a hostile fleet so close to one of our Colonies is too close to home to ignore.

As these are Private Military Corporation vessels, they are considered to be geared primarily for warfare.

All ships in Task Force One that are currently Capable are to immediately travel to the Excalibur System at best speed, and Rendezvous with the USS Banshee, in order to set up defensive measures. Task Force Command will fall directly under Captain Kinney Randt of the USS Veracruz.

Standing orders are as follows.

USS DeBakey: You are to provide any and all emergency medical assistance to the Colonists and Civilian merchant ships where Possible.

Beta Squadron (USS Kurai, USS Foil, USS P'Jem) - You are assigned to the ongoing protection of the USS DeBakey at all times.

Good luck, ladies and gentlemen. I hope to see you all safe after the dust settles.

The USS Banshee arrives in the Excalibur Sector and readies for the arrival of Task force One. The ship under the command of Captain Jamie Czavicevic began to evacuate all non essential personnel including civilians from the area.

There where minor injuries among the evacuation as rumors circulated of the incoming enemy fleet. Under this stressful conditions Captain Jamie Czavicevic and the crew of the USS Banshee prevailed and overcome the odds to evacuate everyone with minimal fuss.

The EDC fleet arrives and bears down on the federation ships in the sector, Captain Jamie Czavicevic of the USS Banshee and Captain Lan Nakajima of the USS Cochrane lead the battle.

The Federation Fleet moved in to position and Captain Jamie Czavicevic issued the attack order, as the fleet began its attack sensors detected several Federation com signals on board the Lead Battle cruiser.

Bombers were sent to attack the remaining carriers and cruisers, the SF-146 and SF-132 Concentrated on the deference of the first cruiser to open a hole, the Marines could get a special forces team on board to free the the hostages. Shortly after second battle cruiser was destroyed the USS Odysseus reported being swarmed by fighters and bombers.

Captain Jamie Czavicevic redirected a squadron of MAB fighters to assist and ordered the USS Banshee to target the remaining capital ships carriers first. Several Frigates had been destroyed by "Red Squad" and the USS Amundsen reported they were continuing to clear them.

USS Odysseus reported a coolant leak and issues with their warp core ejection system. They began saucer separation and evacuation. Captain Jamie Czavicevic ordered the Debakey to pick up the escape pods, a full core breach of the Odysseus had ensued. The captain of the Odysseus took the saucer into the heart of the enemy fleet taking out several of their frigates and smaller ships when her core breached.

USS Epsilon reported the USS Kenya (NPC Ship) lost with all hands aboard. Captain Lan Nakajima reported that USS Cochrane came up with a plan to destroy the second carrier with a Tri-cobalt device, Captain Jamie Czavicevic ordered the USS Agamemnon and USS Goddard (NPC Ship) to clear a path, as the USS Banshee covered the rear. As the 4 federation ships approached the remaining carrier the USS Cochrane fired the warhead into the carrier causing massive damage and the carrier began a full breach. USS Grenadier reported in requesting permission to tow the USS Amundsen to to dock and medical attention from the Debakey Captain Jamie Czavicevic Confirmed.

As the Fleet finished off the remaining ships USS Banshee turned to the rescue operation. MAB reported the turrets on the cruiser have been neutralized, Captain Czavicevic then ordered the Marine tactical unit call sign "Street Fighter" in to recover the civilians. Street Fighter boarded the cruiser as an intense fighter fight began, the Marines recovered one civilian but reports confirm that the Commander of the EDC ship had escaped taking 2 high value civilian hostages with him.

USS Kenya (NPC Ship) - Lost with All Hands aboard.

Initial reports indicate that the following Starships were seriously damaged or disabled in the action:

Initial reports indicate that the following Starships suffered heavy damage in the action:

Initial reports indicate that the following Starships suffered minor or no damage in the action:

Initial reports indicate that the enemy suffered the following casualties:

The enemy fled the battlefield, while Marines boarded and seized one enemy Battlecruiser, rescuing one hostage but three of their VIP Targets eluded capture.

With all Capitol Ships of this fleet destroyed, the enemy threat to the Excalibur Sector is severely reduced. Recommended continued observation of the area in case the enemy commits new forces to the field, or redeploys from their fleet moving into the Midgar Sector.

The second division of Task Force One, under the Command of Captain Kinney Randt set up in the Corona of the Midgar Star, waiting to ambush the El' Dorain Combine Flotilla. Captain Randt gives the order to fire all weapons on the hostile fleet, disabling a number of frigates. The EDC Fleet retaliate.

The USS Altair was ordered to engage light cruisers, with the USS Venture along with Alpha and Gamma frigate squadrons taking on destroyer-sized vessels, the USS Darwin providing long-range torpedo support. the USS Veracruz and USS Shogun, under temporary command of Lieutenant Commander Mac Gaelyth combined firepower and engaged the fleet's larger vessels.

The EDC Dreadnought had charged up its primary weapon, and had fired. The Gamma Section of the USS Altair, which was in Multi-Vector Assault Mode, had been totally destroyed, with no debris trace. The USS Nashira had reported complete Warp Reactor failure, despite a close miss. From analysis of the USS Cazalet, this weapon appears to affect Warp Engines.

The USS Venture had taken on a pair of Battlecruisers, destroying one and taking on the second, requested infantry boarding assistance. With none to spare, the USS Veracruz armed Hirogen 'guests' and beamed them over to capture the remaining Battlecruiser.

The Nashira, however, with minimal power was suffering critical hits from EDC Fighter coverage. the USS Shogun broke off from assisting the Veracruz in infantry deployment, in order to effect a rescue. The Nashira's shields had failed, as had her antimatter containment. The Commanding Officer of the Nashira, Captain Oreshi, ordered an immediate evacuation of the starship. The Rescue Operation had turned the Shogun into a primary target for the EDC, taking a hammering from the remaining cruisers and frigates in the area, before the USS Mata Hari came to render assistance, alongside the armed repair tender the USS Scott. The Shogun however was already significantly damaged, the Bridge taking a torpedo Strike, killing the operations officers and leaving Lieutenant Commander Gaelyth and the Venture's volunteer Tactical officer, Lieutenant Bott, standing.

The USS Veracruz itself had taken a significant amount of damage, causing Captain Kinney Randt to be taken to the sickbay, leaving Commander Aryela Dagger in command. They had deployed the Hirogen hunters to the remaining Battle Cruiser and, due to thier shields being down, had taken significant damage.

The remaining EDC Forces not destroyed in the engagement broke off and headed to the Deshima Starbase; under counsel from Lt. Commander Gaelyth, the Task Force let them go. The Main Dreadnought however remained, presumably to cover the escape of the remaining ships. It opened fire, and clipped the USS Dorvan's Nacelle, which seemed to bend the beam well away from the otehr ships. The Dorvan however did not fare so well, and was destroyed.

The Starfleet vessels opened fire under the directions of Commander Aryela Dagger, causing their shield grids to overload spectacularly, causing a number of hull fractures. However with no shields to power, the EDC Commander was able to recharge thier primary weapon faster, and did not return fire with secondary weapons.

The Starfleet vessels fired back, torpedo and phaser strikes impacting against the hull, but despite the extreme damage caused, the ship remained. On the third volley, the group broke off as it was close to full charge and firing.

The Dreadnought was destroyed after the volley shattered its hull, however the resulting explosion was powerful enough to render a number of starships crippled in the blast.

Those ships able to move limped along towards the Deshima System, and effected a blockade of the Station, allowing non-EDC ships in and out of the base. The EDC Fleet was berthed there, near permanently, unable to afford the repair costs of the Station's engineers, and were under consistent financial strain of paying the docking fees.

USS Venture. significant hull damage, approximately 39% of the Spaceframe with fractures. Still under a skeleton/half crew due to volunteering 50% of the crew to the USS Shogun

USS Darwin, relatively lightly damaged, approximately 10% hull damage, and is necessitating a replacement of mission pod due to having 50% torpedo tube shut down due to excessive overheating wear-and-tear.

USS Altair Severely damaged, missing 1/3 of spaceframe due to destruction of the Gamma section. Is permanently 'stuck' in Multi-Vector Assault Mode

USS Mata Hari, Suffering from 25% hull integrity and over half her shield generators overloaded. One Impulse Engine is currently down and in need of Repair/Replacement.