The Denkiri Centre for Creativity was established on Astraios Prime in the early months of 2422 as a means of outreach to the scientists, philosophers, artists, engineers, and designers who dwell in the Gamma Quadrant. Its philosophy was inspired by the Terran author Gene Roddenberry, who had, in the 20th and 21st Century, envisioned a universe in which sentient life forms would gather to share knowledge, conduct research, and improve the quality of life for all.

Denkiri Centre is named after the long arc of the Milky Way Galaxy that spills into the Gamma Quadrant.

‘Denkiri’ is a centre for creativity which encourages innovation, imagination and interdisciplinary collaboration. Its mission is to reach out into the Gamma Quadrant and bring together scientists, artists, composers, designers, engineers, philosophers, and creators with the goal of sharing knowledge, exploring ideas, and building a foundation for peace and prosperity.

Astraios Colony was established on stardate 110111 when Starfleet returned to Astraios Prime after a local inter-planetary conflict had been resolved. Since then, the Colony and its Helenic Class SpaceStation, SS Astraios, have been charged with the defense of Astraios Sector as well as diplomatic outreach into the Gamma Quadrant. The civilian government of Astraios Prime supports Starfleet’s presence on the planet and works in collaboration with UFS to ensure peace is maintained in the Sector.

Denkiri CC is housed in a state-of-the-art facility built according to the specifications of its Commanding Officer, Vice Admiral Poison Toocool.

The facility features an indoor garden with open spaces and places to sit and imagine; an Astrometrics floor featuring charted areas of the Gamma Quadrant and known civilized worlds; a conference floor; and a project/workroom floor with a music studio. Each floor has high ceilings, plenty of natural light, extensive windows, and ergonomic fixtures. An Art Gallery is adjacent to the Denkiri building. 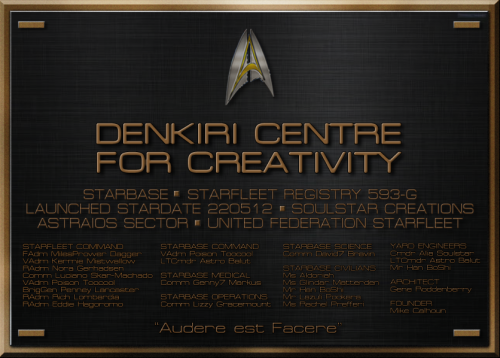 Retrieved from "https://lcars.ufstarfleet.org/index.php?title=Denkiri_Centre&oldid=110610"
Category:
This page was last edited on 2 September 2022, at 07:41.