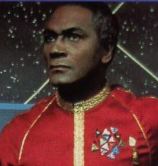 Commodore is a widely used rank within Starfleet Command that combines much of the hands-on approach of a captain with a greater level of command and responsibility. This is the rank of commodore, and as with the more senior rank of admiral, a career officer would expect to work his or her way through the ranks up to this level. Unlike an admiral, who would usually be stationed well away from the front lines, a commodore is likely to experience much of the excitement and danger associated with a career in Starfleet.

The majority of commodores come to this rank with a broad wealth of experience. Many have commanded a starship at one time, and some, such as Commodore Matt Decker, continue to do so after their promotion.

Starfleet realises that in order for it to function effectively, it needs to have senior officers who understand the nature of the problems faced daily by their fleet and personnel, and who may even be able to anticipate problems before they occur.

However, due to the huge commitment expected from the service, it is inevitable that they often find themselves generating orders that they know are dangerous and may lead to loss of life. Controlling their own personal feelings, and putting the good of Starfleet first is a common trait among commodores, although they fully realise that there is much more to earning the respect of their commands than simply barking out orders. It is the measure of the calibre of officers who reach this level that they can override their emotions and carry out their duties, no matter how unpleasant they may personally find them.

Due to their years of command experience, all commodores are well versed in Starfleet regulations, but their elevated role often means that they have to take on areas of responsibility that they may not have previously experienced. Generally, the duties carried out at this rank can be split into four distinct categories: working from Starfleet Command, commanding a starbase, commanding a starship, or taking charge of special projects. Starfleet tries to fit the experience of the officer with the role and, for the most part, succeeds.

Commodores are involved in the assimilation of information from all parts of the Galaxy, taking data from the various quadrants and acting on any possible threat. Much of this work is routine, but if something potentially threatening occurs, commodores have the power to act fast.

Commodores are well schooled in thinking tactically, and although they may have to order one or more ships and crew into a potentially disastrous situation, they know such decisions come with the job. But even though they may have a geographical detachment from the action, they still know from their own experience what it will feel like at the sharp end, and this helps to gain them the respect of the officers who are faced with carrying out these orders.

Unlike later rank structures, it is perfectly feasible for a commodore to maintain command of a starship. The duties remain the same as that of a captain, but the commodore can pull rank over the captain of another vessel should he feel it necessary to take over command of that ship.

Whatever the assignment, the role of Starfleet commodore carries a huge responsibility. Commodores are called on to make life or death decisions, and to risk their own lives and those of friends and fellow officers. It takes a special kind of person to carry out this task: knowledgeable, tough, fast acting, yet thoughtful and understanding, someone who has proved themselves time and time again.