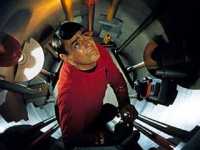 The Chief Engineers of Starfleet must be innovative, highly skilled, and versatile. These impromptu inventors and miracle workers are often the crew’s saviour – they are authoritative problem solvers in times of crisis.

Starship and starbase designs require a large number of complex systems in order to function both safely and efficiently, and are monitored and controlled by highly trained Starfleet personnel who specialise in a particular area of expertise. Engineering is one of the most vital areas aboard a starship, generating the power required for every part of the ship, as well as directly operating the drive systems at the heart of interstellar travel. 2245 saw the post of Chief Engineer included within the command structure of starships and starbases for the first time as the chief engineer is a vital senior member of staff.

The career path a future chief engineer may follow can be quite varied, and does not always have to be totally dedicated to engineering, although individuals with a greater amount of experience in different energy production and control systems may be viewed more favourably for promotion to this senior level. Chief engineer Montgomery Scott accumulated many years of experience before his promotion, while Chief engineer Geordi La Forge had a much more varied career before being promoted lieutenant, and assigned the role despite previous reservations over his experience by Chief Engineer Logan in 2364. Chief engineers are primarily appointed for their engineering skills and knowledge of a vessel’s systems, but the role includes a significant amount of personnel management as well as practical work. Regardless of past experience, the role and duties of the chief engineer remain the same on all Starfleet vessels and facilities.

The majority of the chief engineer’s time is spent in main engineering, overseeing a team of duty engineers who carry out many of the routine tasks required in the efficient running os a starship’s energy production and engines. Chief engineers are expected to have a wide-ranging knowledge of their vessel’s systems, but will often delegate tasks requiring a more exhaustive understanding to the appropriate specialist within the crew complement and act on their recommendations. One of the primary roles of the chief engineer is to liaise with the assistant chief engineer and assign duties on a daily or weekly basis, often working out the duty rosters and logs in advance to cover engineering systems that may be required for mission-specific requirements. The chief engineer submits individual crew performance reports on a regular basis, and also recommends individuals for promotion, or to be delegated different duties based on their effectiveness within the engineering department. Occasionally, the chief engineer has to carry out disciplinary proceedings on a crew member, or give them warnings about conduct and behaviour, with more serious offenses referred to the first officer or captain.

Communication between the senior command staff and the chief engineer is vital, with the chief engineer expected to inform the captain of any problems regarding the environmental, power distribution, or drive systems immediately. The status of the warp and impulse engines is particularly important, with the chief engineer often having to improvise solutions to problems under tremendous amounts of pressure. To this end, a chief engineer must know the operational systems within his vessel and will carry out continual research on new technologies, materials, and techniques involved in the production and distribution of energy systems. Chief engineers are also expected to have a wide knowledge of non-Starfleet technologies, often having to develop some form of effective link between incompatible systems.

Supervision of the primary engine systems is traditionally transferable from Main Engineering to the bridge or Ops centre, giving the chief engineer a regular presence within the primary control area of the starship or starbase via the engineering station. This presents a number of screens duplicating information from Main Engineering, allowing the chief engineer to react to a large number of reconfigurable consoles giving detailed information on the EPS, ODN, and other relay systems, as well as the condition of the warp propulsion systems. The master situation monitor can provide further information, with the chief engineer having the ability to make changes to systems and create bypasses around damaged or inoperative components. Under certain circumstances, the chief engineer may also be called upon to initiate and confirm a vessel’s auto-destruct sequence, indicating the high level of security entrusted to this position.

The chief engineer will usually miss no opportunity to work on the engineering systems within their vessel or facility, and must have a practical working knowledge of all the tools that are employed within engineering to repair, recalibrate, and scan the myriad components installed. Access points to the ship’s systems are vitally important, and the chief engineer must be capable of identifying the most efficient and safe way of working on a damaged or malfunctioning component through the Jefferies tube network or other access points. The repair of faulty or damaged systems can often be crucial to a starship’s survival, and the estimates of time to restore the malfunctioning component, as well as the coordinated effort to affect the repair, are once again within the role of the chief engineer. Crisis situations often call on the chief engineer to exceed the safety or design specifications of the ship, or have the ability to carry out highly complex calculations and convert their hypotheses into a working solution. Knowledge of the real-life practical limitations of components and systems compared to their theoretical boundaries can give the chief engineer the confidence to undertake radical solutions, and is one element of the chief engineer’s role that has saved countless starships and starbases throughout Starfleet’s history.