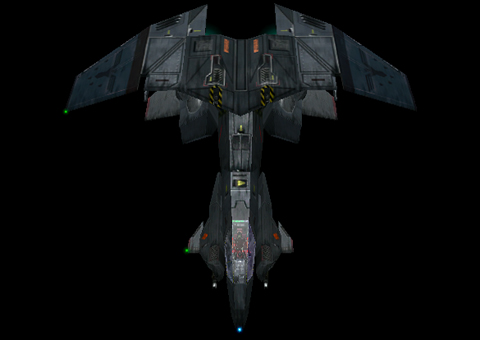 The B-176 Hammerhead is the newest addition Marine Aerospace's arsenal. Given the designation B for bomber, The Hammerhead is a high speed, two manned bomber specialized for both space or atmospheric high speed low altitude precision bombing attacks. The Hammerhead is the first medium bomber of its class allowing it to fill the gap between the F/B-274 Peregrine and B-237 Titan. While some consider traditional small craft ineffective against large installation or capital ships, The Hammerhead is designed to destroy given targets alone or in a set of three known as a squadron flight. This allows the hammerhead to slip past enemy sensors and strike the given target without the need of a fighter escort for defense as the heavier bombers require such as the B-237 Titan.

The Hammerhead is the first bomber of it's kind designed to operate in both space and atmospheric conditions giving this bomber great versibility. It can carry a far heavier payload than the F/B-274 Peregrine. Being able to carry a heavier payload does come at a cost. The Hammerhead is far less maneuverable then the Peregrine. However the designers took this in mind, giving it two overpowered engines allowing the Hammerhead's crew to make up for this by using fast precision attacks on both moving and stationary targets, regardless if it is ground targets on a planet, or an orbital platform. The crew of a Hammerhead consisting of the pilot and the RIO or Radio Intercept Officer as known in the 21st century, but is more accuurately defined as a Sensor Array Officer. Through tradition the name RIO has been kept and the role though updated is still the same. The pilot's role is to fly the bomber to it's intended target, handle all evasive maneuvers, and any offesnive attacks against enemy craft that attack it. The RIO also has multiple roles just as his predessor did. The RIO is responsible for plotting navagation routes to the target as well as releasing the bomber's payload once the target has been reached. The RIO is also responsible for helping the pilot in assessing sensor data and IFF signatures. During combat the RIO operates all of the defensive systems to allow the pilot to concentrate on combat maneuvers. Both the pilot and RIO are picked from the highly elite F/I-375 Valkyrie Fighter pilots. Once chosen for the Hammerhead program they go through a exensive training program of six months learning how not only to operate the Hammerhead, but also to work as a tight knit team. Most pilots after completion are sent to the SF-238 - Red Knights Squadron while a chosen few are sent back to their original squadrons in order to allow squadrons to have flexiblity to handle any mission that maybe assigned to them.