The UF Starfleet Awards Program was created to recognise our members who have distinguished themselves within our organization by constantly setting a standard and excelling in their duties.

Also note that awards have specific guidelines and are not handed out for “being part of the Fleet” or just “doing your job”. Awards are meant to recognise those members who go above and beyond the call of duty and this is really the keyword here.

All awards are issued at the pleasure of the Commander-in-Chief, United Federation Starfleet.

Recommendations are made via the [|Awards Form] by members of UFS for consideration by the Promotion and Awards Board.

While other members of the Promo/Awards Board have a say, it is ultimately up to the Commander-in-Chief and Deputy Commander in Chief to give awards. Awards are then announced, along with the Promotions.

These are given out for carrying out regular duties to a regularly high degree of proficiency and ability. They should enhance the running of the ship/staton/branch/Academy, through their regular excellent work. These can be RP or non-RP.

They are the most common award aboard any ship or station.

These are given out for carrying out duties to high degree of ability and showing creativity in them, such as finding new ways to do things, to direct things, or to impact RP. These focus on what the person has brought to the organization that enhances it. It doesn’t have to be a huge change, but just things that are advancements to make the organziation/roleplay/duty stations better.

Examples of Commendation types include:

These awards are handed out automatically at certain milestones in one's career. In order to apply for these you must email promotions@ufstarfleet.org and the Promotions and Awards Director will research and check information to ensure you are eligible.

Of the Year Awards

These awards are handed out 1 (ONE) time per year at the Admiral's Banquet and are represented on the member's Service Jacket or Unit page.

These coins are awarded directly from the Joint Chiefs of Staff. The criteria may be different for each time the coin is awarded but usually follows a forum post as to the reason it was issued. These appear on the Service Jackets of the recipients.

When a decoration is awarded more than once to a particular crewmember, a second medal is not awarded, instead a cluster is earned.

It should be noted that certain decorations such as citations and major and minor commendations may be awarded many, many times during a career. In that event, a gold cluster can be worn to represent twenty awards. Once a crewmember earns a gold cluster, they will typically refrain from further clustering until twenty more decorations have been earned, taking then another gold cluster. 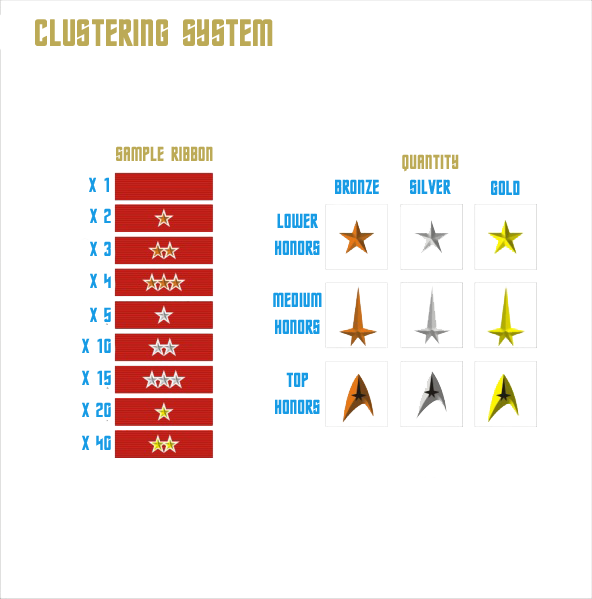